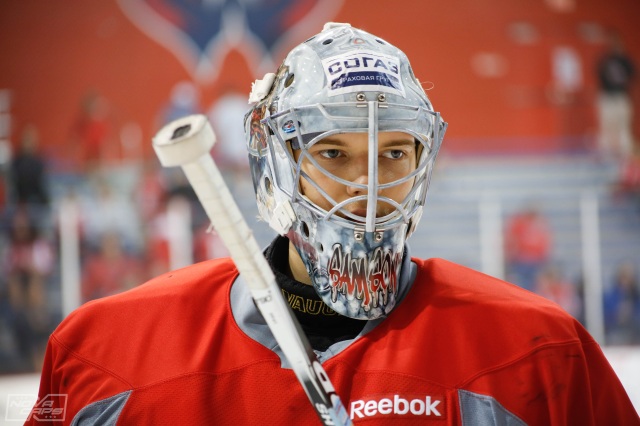 Washington Capitals goalie prospect Ilya Samsonov returned to the win column for the second time in this young KHL season, as Metallurg beat Admiral 4-2 Tuesday night at the Magnitogorsk Arena. Samsonov is now 2-0 so far this season.

Samsonov, 20, stopped 27 of 29 shots, including this gem off of his teammates skate.

Samsonov made his KHL season debut on Sunday, August 27, in a 5-4 win for Metallurg. Samsonov made 22 saves in 26 attempts for a .846 save percentage. Samsonov, selected with the Capitals’ first pick in 2015 (22nd overall), has one year remaining on his KHL contract.

Samsonov’s stats for the season so far:

Jon has been a Caps fan since day one, attending his first game at the Capital Centre in 1974. His passion for the Caps has grown over the decades, which has included time as a season ticket holder, social media and community organizer, and most recently led to the founding of NoVa Caps in 2014. Jon earned a Bachelor's of Science in Engineering at Old Dominion University, and is a Systems Engineer during intermissions, which has been instrumental in supporting his Capitals habit.
View all posts by Jon Sorensen →
This entry was posted in News and tagged Ilya Samsonov, Metallurg Magnitogorsk, Washington Capitals Goalie Prospect. Bookmark the permalink.