The NHL’s public relations department on Friday released their regular season recap for the 2019-2020 season. The NHL announced Tuesday that the 2019-20 regular season was deemed complete through games of March 11, the day before the League paused play due to the COVID-19 pandemic. 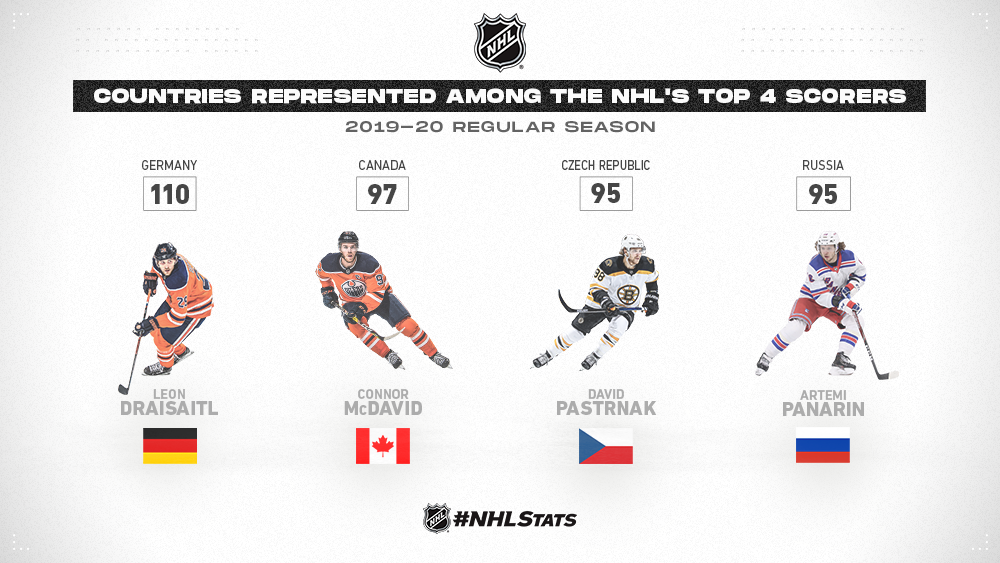 Additionally, each of the top-five goal scorers hail from different countries – the seventh time that has happened. This is the first season in NHL history to end without a Canadian among the top eight in goals. Top Performers
A look at League leaders for the 2019-20 regular season:

* Oilers forward Leon Draisaitl became the first German-born player to lead the NHL in points and the 10th different European-born player to do so. It marked the third time in four years that an Oilers player won the Art Ross Trophy, the first team to achieve that feat since the Penguins claimed seven in a row from 1994-95 to 2000-01. Draisaitl also led the League with 67 assists. 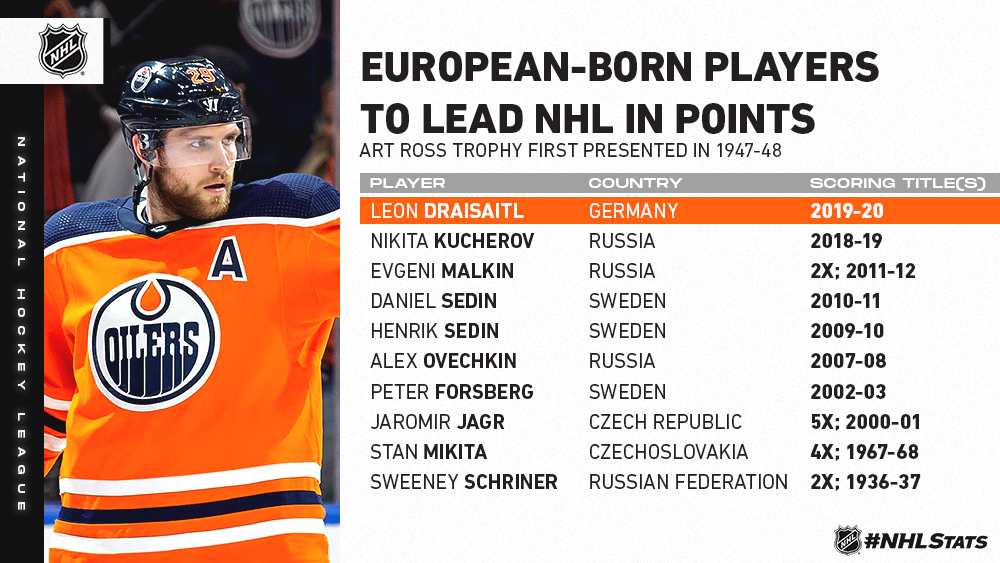 * David Pastrnak became the first Bruins player in 45 years to top the NHL in goals and first to win the Maurice “Rocket” Richard Trophy (introduced in 1998-99). He joined Phil Esposito (3x) and Bobby Orr (2x) as the third player to score at least four hat tricks in a season for Boston.

* Capitals forward Alex Ovechkin topped the NHL in goals for the third straight season and a record ninth time overall, two more than Bobby Hull (7x). Ovechkin tallied four hat tricks in a season for the first time in his career and became the fourth player in NHL history to score 48 or more goals in a season at age 34 or older. 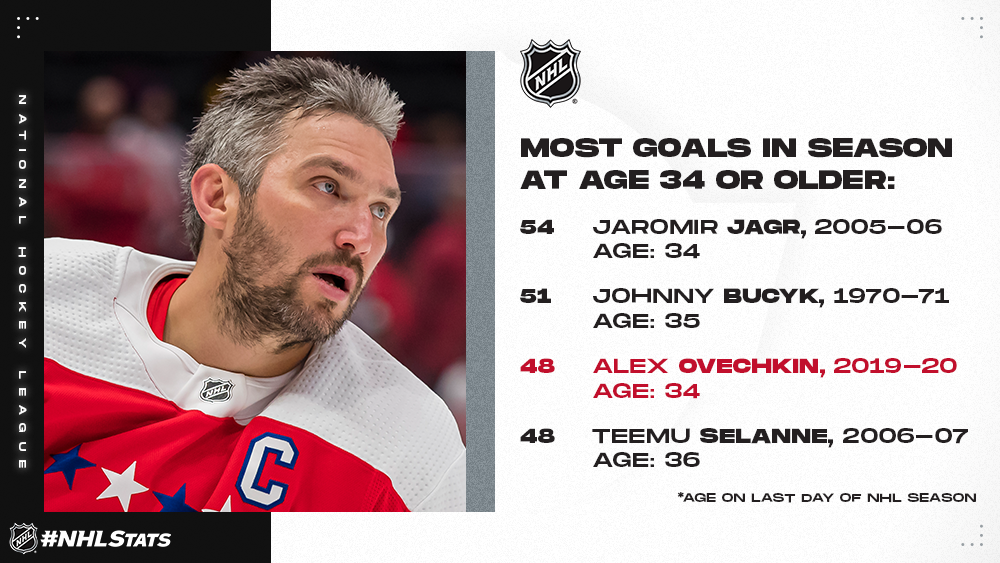 * Quinn Hughes of the Canucks and Cale Makar of the Avalanche finished first and second in rookie scoring, respectively, the first time in the NHL’s modern era (since 1943-44) that defensemen have held those ranks at the end of a season. Hughes became the third defenseman in that span to lead all rookies in scoring (outright or tied), joining Bobby Orr (1966-67) and Brian Leetch (1988-89). 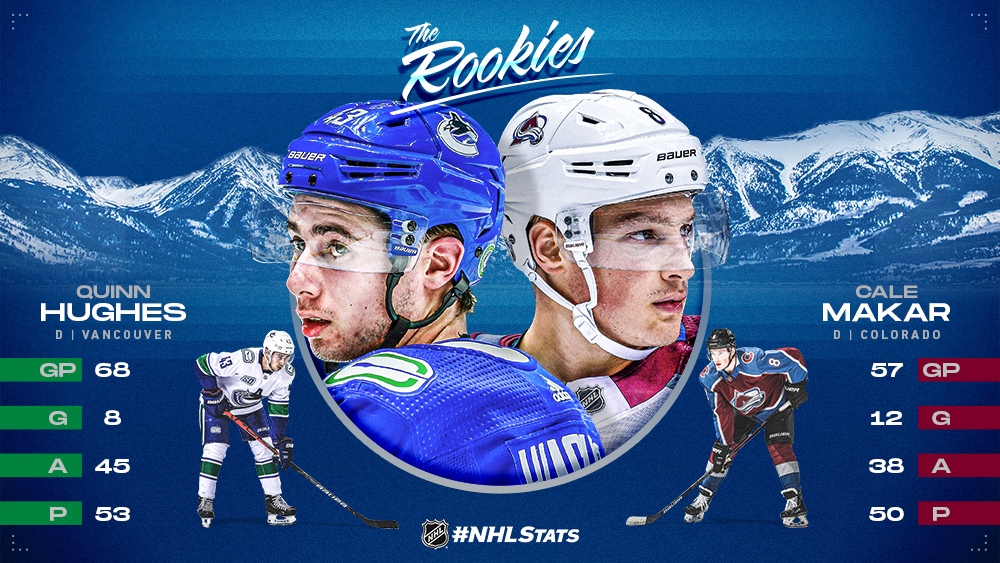 * Blackhawks forward Dominik Kubalik topped all rookies with 30 goals, the first Czech-born player to lead rookies in that category and third to reach the 30-goal mark in a season after Petr Klima (32 in 1985-86) and Petr Prucha (30 in 2005-06).

* Zach Werenski paced defensemen with 20 goals, a single-season goal total reached by only seven other active blueliners and a Blue Jackets franchise record among defensemen.

* John Carlson of the Capitals led defensemen with 60 assists and 75 points. He was on pace for an 89-point campaign, a mark last reached by a defenseman 26 years ago.

* Additionally, Vasilevskiy is the first netminder to lead the League in wins for three consecutive seasons since Devils goaltender Martin Brodeur did so for four consecutive campaigns from 2002-03 to 2006-07.

* Anton Khudobin posted a .930 save percentage, the second straight season that a Stars goaltender has led the NHL in that category (min. 23 GP). 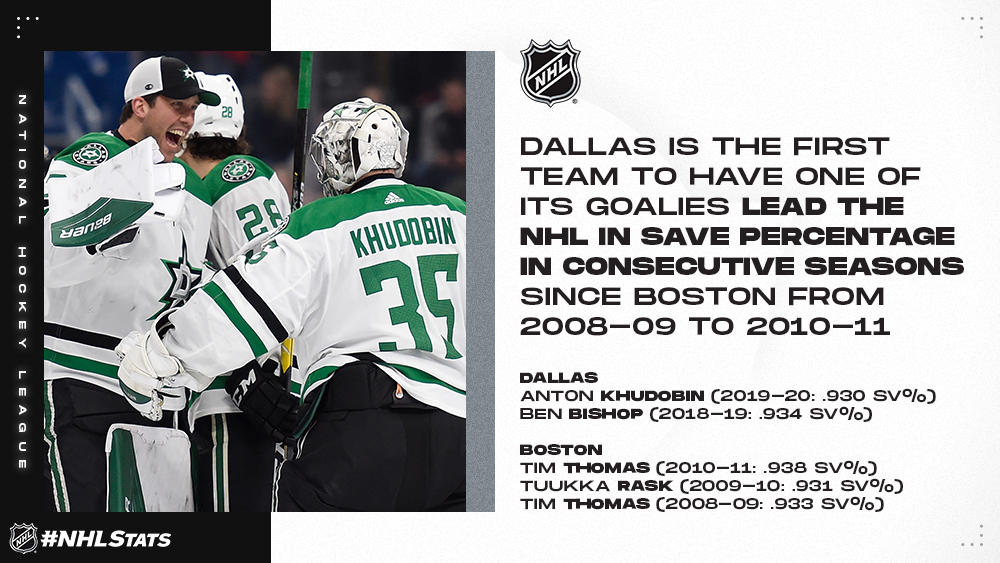 By the Numbers
A closer look at some of the best stats from the 2019-20 regular season:

207 – Combined points by Oilers forwards Leon Draisaitl (110) and Connor McDavid (97), who ranked first and second, respectively, in the 2019-20 scoring race; it marked the seventh time in the last 44 years that teammates finished first and second in the NHL in points. 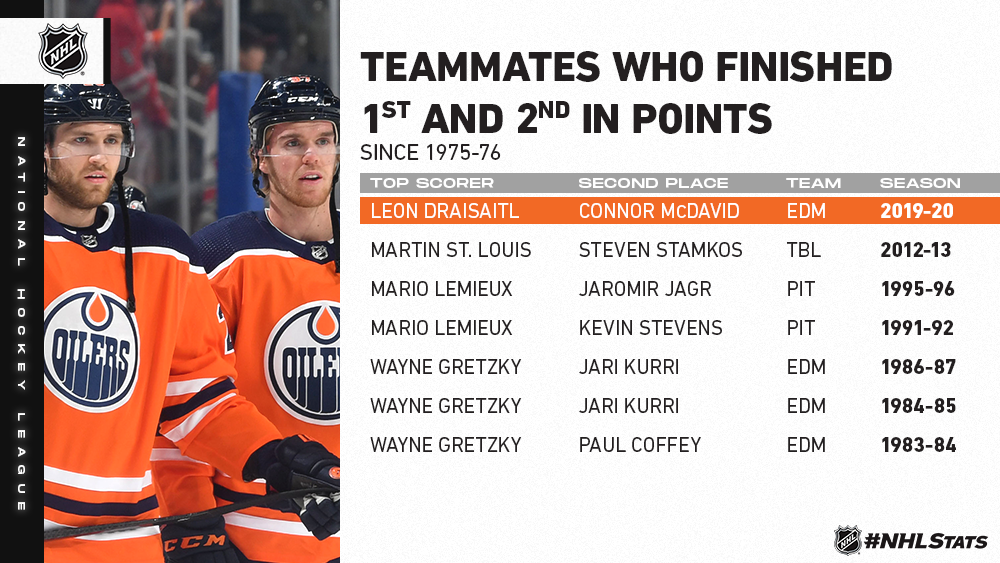 56 – Different players with at least one hat trick, including seven skaters with two and two players with four.

10 – Shutouts recorded by rookies, including five by Blue Jackets goaltender Elvis Merzlikins (tied for second in the entire NHL).

7 – Season-ending win streak by the Kings (two shy of the club record), capped by a Martin Frk winning goal with 4:41 to play in what turned out to be the final game of the regular season.

0 – Number of players among the top five in points who have celebrated their 30th birthday. 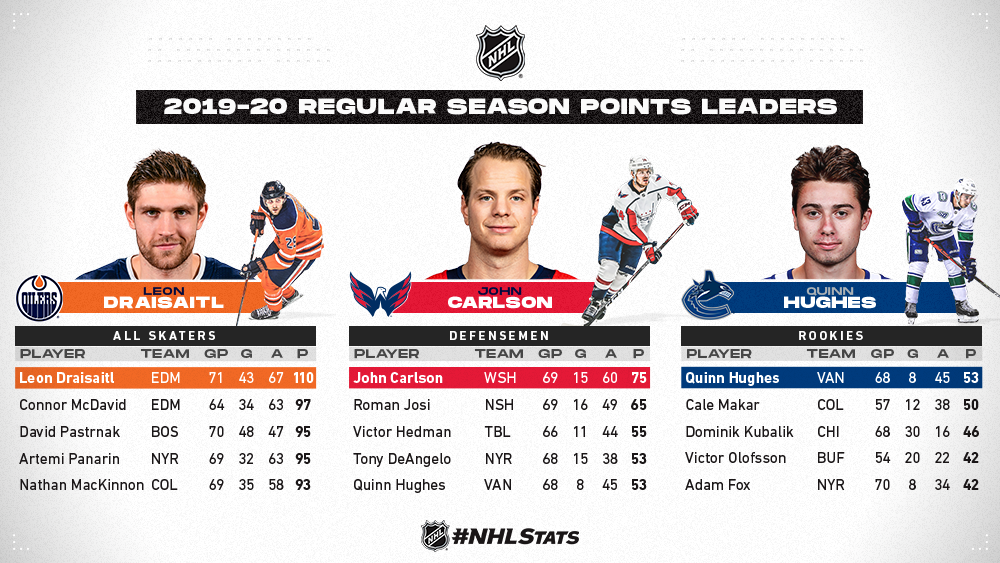 Jon has been a Caps fan since day one, attending his first game at the Capital Centre in 1974. His interest in the Caps has grown over the decades and included time as a season ticket holder. He has been a journalist covering the team for 10+ years, primarily focusing on analysis, analytics and prospect development.
View all posts by Jon Sorensen →
This entry was posted in News and tagged 2019-2020 NHL Season, NHL Statistics. Bookmark the permalink.