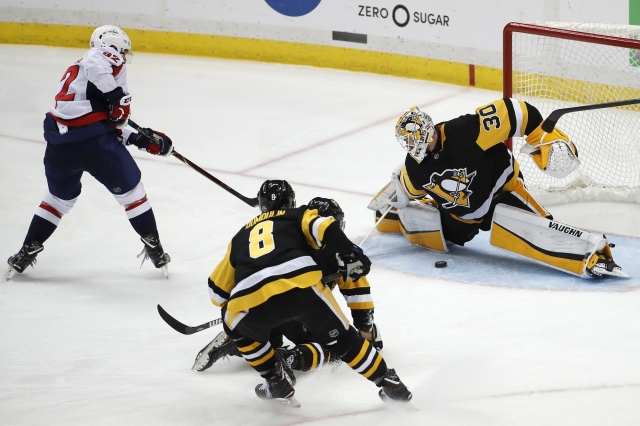 NBC Sports announced their broadcasting schedule for the 2019-20 NHL season, the final year of their contract with the league. The Washington Capitals will be featured in 12 games on the networks of NBC, including three times on primetime, this season. Each of those three appearances on NBC primetime will feature the Capitals and the Pittsburgh Penguins, arguably the best rivalry in the NHL right now, on “Star Sunday,” including twice in Washington on February 2 (Super Bowl Sunday) at 12:30 PM ET and February 23 at 12 noon ET.

The Capitals will also face the Philadelphia Flyers three times and the defending Stanley Cup Champion St. Louis Blues twice on NBCSN, respectively, over the course of the regular season.

The Capitals will be featured on NBCSN’s “Wednesday Night Hockey” seven times during the regular season, including the Blues’ season opener where they will raise their first Stanley Cup Championship Banner in franchise history on Wednesday, October 2 and against the defending Eastern Conference Champion Boston Bruins at home on Wednesday, December 11.

Four of the team’s national appearances (vs. Penguins twice, at Penguins on 3/22, at Minnesota Wild on 3/1) will occur on “Star Sunday.”

The Capitals’ first home game after the All-Star Break on Wednesday, January 29 against the Nashville Predators at 7:30 PM ET will also be broadcasted on “Wednesday Night Hockey.”

According to NHL.com, 14 of the 25 “Wednesday Night Hockey” programs will feature double-headers and 75% of NHL teams will be shown on NBC networks this season.

Other notable matchups around the league to be featured on NBC this season include the 2020 Bridgestone NHL Winter Classic between the Predators and Dallas Stars at the Cotton Bowl on January 1, the Hudson River rivalry between the New Jersey Devils and New York Rangers which will showcase the top two picks in the 2019 NHL Draft (Devils center Jack Hughes and Rangers forward Kaapo Kakko) going head-to-head on October 17, and a rematch of the first-round series in the 2019 Stanley Cup Playoffs between the Vegas Golden Knights and the San Jose Sharks on October 2.

The full 109-game NHL on NBC schedule can be found here.

NBC Sports Washington and NHL Network will each release their broadcast schedules before the start of the season.

Harrison is a diehard Caps fan and a hockey fanatic with a passion for sports writing. He attended his first game at age 8 and has been a season ticket holder since the 2010-2011 season. His fondest Caps memory was watching the Capitals hoist the Stanley Cup in Las Vegas. In his spare time, he enjoys travel, photography, and hanging out with his two dogs. Follow Harrison on Twitter @HarrisonB927077
View all posts by Harrison Brown →
This entry was posted in Games, News, Teams and tagged Harrison Brown, NBC Sports, News, NHL, Washington Capitals. Bookmark the permalink.