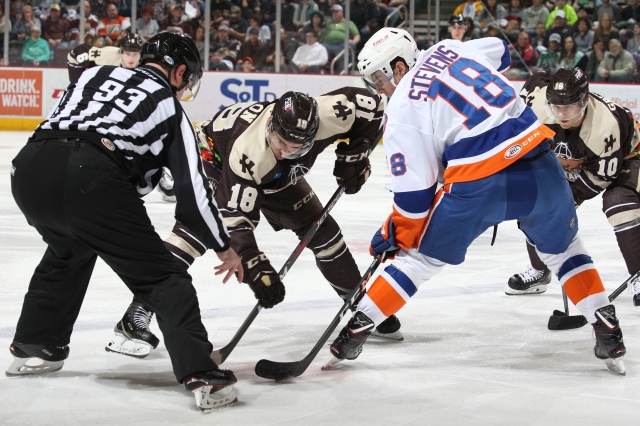 Bridgeport was led in scoring by a familiar face to Hershey fans, Chris Bourque. The Hershey all-time great scored 15 goals and added 39 assists for a total of 54 points. Bourque last faced the Bears in a playoff series in 2015 as a member of the Hartford Wolf Pack. Bourque hurt his former team with three goals and eight assists in Hartford’s series win in six games. He scored the overtime winner in game one and assisted on the winner in game four. The Hershey fans took to booing Bourque in that series and every time they booed, Bourque did something to hurt the Bears.

After Bourque, the Sound Tigers have five more players who have scored 40 or more points and then three more with 30 or more points. Steve Bernier tops Bridgeport with 24 goals and Otto Koivula has 21. Those are the only two 20-goal scorers on the team. Defenseman Sebastian Aho is fifth in the AHL in defensemen assists  with 37. Center Josh Ho-Sang also had 35 assists. Fellow defenseman Mitchell Vande Sompel added 10 goals and 21 assists.

In goal, both Christopher Gibson and Jeremy Smith have won more than 20 games and had identical .902 save percentages. Gibson is the likely starter for Bridgeport, having won his final three starts of the season. Smith has lost his last three and gave up eight and seven goals in his final two starts.

Hershey has three players with more points than Bourque in Mike Sgarbossa (65), Riley Barber (60) and Aaron Ness (55), but only have three other players with 30 points or more (Jayson Megna, Nathan Walker and Garrett Pilon). Barber and Sgarbossa are both 30 goals scorers and Megna had 20 this season. Ness was the top defensive scorer in the American Hockey League (AHL) this season and is one of the league’s best passers. Other players have to step up and give the Bears secondary scoring. When Hershey struggled early in the season, they were relying too much on Sgarbossa and Barber. They were successful when the other players stepped up offensively.

Devante Smith-Pelly could be a key figure with his Stanley Cup playoffs experience. He had eight points for the Capitals in the playoffs last season en route to their Stanley Cup triumph. There are a lot of players on the team who will be experiencing the Calder Cup Playoffs for the first time and a veteran player like Smith-Pelly can be a difference maker.

Defenseively, Hershey is anchored by a top pairing of Ness and Tyler Lewington. After those two, the only other defenseman with significant Calder Cup playoff experience is Ryan Sproul. Colby Williams has played three playoff games. Lucas Johansen, Connor Hobbs, Tobias Geisser and Bobby Nardella have never tasted the post-season at the AHL level. How those young defenseman respond to playoff hockey will play a big role in the series.

Goaltending is a question mark for the Bears, but not because of the level of play. The question is who will be in Hershey to start the series. Both Samsonov and Vanecek have been recently recalled to Washington to serve as the third goalie for the Capitals in the Stanley Cup playoffs. If both guys are with the Bears, the team has two top-notch goalies to rely on and Hershey would have the advantage in this area. If one stays in Washington, the depth takes a hit. The team will be fine with either Vanecek or Samsonov starting, as both have performed well. The problem comes to light if the starter gets injured. The current backup is Adam Morrison and he has only seen action in 12 games this season with South Carolina in the ECHL.

Another question mark for Hershey is health. Barber missed the last six games with an upper body injury and Pilon missed the final five contests with an injury. The Bears have added more depth up front in recent weeks with the additions of Joe Snively, Chris McCarthy, Dylan Steman, Steve Spinner and Riley Sutter, but Barber and Pilon are two of the Hershey’s top six scorers. It is better to go into a series with all of your top guns.

How will the series play out? The series can go either way. Hershey and Bridgeport are evenly matched, as their records overall and against one another shows.  Both teams will be hungry after playoff absences. Both teams have a several young players who have not experienced the Calder Cup Playoffs.  The series likely will be come down to whomever’s young players rise to the occasion on the playoff stage.

The schedule is HERE! The 2019 Calder Cup Playoffs presented by CJ's Tire and Automotive begin next week versus the @soundtigers. Tickets for Hershey's home games in the opening round go on sale on Tuesday, April 16 at 10 a.m. #HBH #DefendTheDen

Eric has been a Hershey Bears fan since attending his 1st game at age 8. He has been a season-ticket holder since the 2009-10 season and has been writing about Hershey Bears hockey since 2012. His favorite Bears memory is the team's 1996-97 run to the Calder Cup Championship where Hershey was 5-0 when facing elimination. Eric graduated from Fordham University in 2000 with a bachelors in communication and from Iona College in 2005 with a Masters in Journalism. He is also a photographer and serves as an assistant soccer coach for the Pottsville Area High School girls soccer team.
View all posts by Eric Lord →
This entry was posted in Hershey Bears, News and tagged 2019 Calder Cup Playoffs, Bridgeport Sound Tigers, Eric Lord, Hershey Bears. Bookmark the permalink.