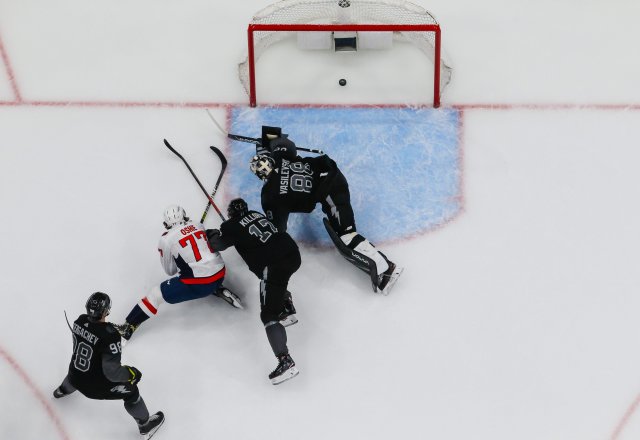 The Washington Capitals beat the Presidents Trophy-winning Tampa Bay Lightning by a score of 6-3 on Saturday night at Amalie Arena for their fourth straight win. The win extended the Capitals’ lead to three points​ in the Metropolitan Division with three games left to go. Goaltender Braden Holtby notched 23 saves in the win.

Connolly out with the “CapsFlu”. Here are the lines! #ALLCAPS #CapsBolts

Forward Brett Connolly missed the game due to an illness while forward T.J. Oshie returned after missing Thursday’s 3-2 win over the Carolina Hurricanes with the same thing.

Center Nicklas Backstrom opened the scoring with his 20th of the season, burying a give-and-go with forward Tom Wilson and beating goaltender Andrei Vasilevskiy at the post 7:23 into the game.

Oshie buried a rebound on the backhand past Vasilevskiy after defenseman Nick Jensen’s shot was stopped to make it 2-0 3:22 after Backstrom scored.

Oshie struck again on the power-play, tipping defenseman John Carlson’s shot from the point in front to extend the Capitals’ lead to 3-0.

The Lightning led 6-3 in blocked shots and had three giveaways while the Caps had four in the opening stanza. They won 53% of the faceoffs in the period.

Backstrom added to the lead at 7:53 of the period, scoring his 21st of the year on a beautiful feed from defenseman Dmitry Orlov in front of the net. Backstrom’s tally came after Tampa Bay started the period with sustained time in the offensive zone but came up empty.

The Lightning got on the board late in the period when forward J.T. Miller tipped a defenseman Mikhail Sergachev shot from the point past Holtby with 2:35 left in the frame.

The Capitals led 28-14 in shots, including 15-9 in the second, 8-7 in blocked shots, and had six giveaways while the Bolts had seven through two. They went 1-for-3 on the power-play and won 56% of the draws in the first 40 minutes.

The Lightning led 14-13 in hits and went 0-for-1 on the man advantage in the first two periods.

Each team was credited with five takeaways heading into the third.

Forward Tyler Johnson buried a wrist shot on a breakaway five-hole after Jensen couldn’t handle the puck at the blue line to cut the Capitals’ lead in half 3:36 into the third.

Capitals defenseman Brooks Orpik tangled with Lightning center Anthony Cirelli after he threw a hit on Orpik along the boards and took him down 9:26 in.

Wilson sent Lightning defenseman Erik Cernak to the locker room with a knockout punch when the two scrapped with 7:47 left.

Captain Alex Ovechkin hit the 50-goal plateau potting a backhand pass from Oshie through the wickets of Vasilevskiy to make it 5-2 with 5:25 to go.

Ovechkin blasted a howitzer from his office off of a pass from Carlson under the pad of Vasilevskiy to make it 6-2 with 3:45 to go. The Lightning challenged for goaltender interference but the goal stood.

Forward Nikita Kucherov cut the lead to 6-3 with a blast from the right cirlce off of a pass from Sergachev with 27.3 seconds left.

The Capitals conclude their road-trip through the Southeast region against the Florida Panthers on Monday night. Action from Sunrise can be seen on NBC Sports Washington beginning at 7 PM ET.

Another for the trophy case. #ALLCAPS #Gr8

Harrison is a diehard Caps fan and a hockey fanatic with a passion for sports writing. He attended his first game at age 8 and has been a season ticket holder since the 2010-2011 season. His fondest Caps memory was watching the Capitals hoist the Stanley Cup in Las Vegas. In his spare time, he enjoys travel, photography, and hanging out with his two dogs. Follow Harrison on Twitter @HarrisonB927077
View all posts by Harrison Brown →
This entry was posted in Games, Lineups, News, Washington Capitals and tagged Alex Ovechkin, Game Recap, Harrison Brown, Nicklas Backstrom, T.J. Oshie, Tampa Bay Lightning, Washington Capitals. Bookmark the permalink.

8 Responses to Capitals Roar Out Of The Gates, Down Lightning, 6-3; T.J. Oshie, Nicklas Backstrom, Alex Ovechkin Score Two Each