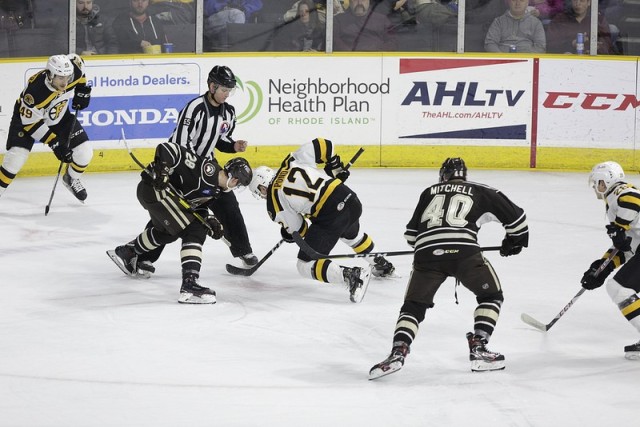 The Hershey Bears fell to the Providence Bruins 6-2 Saturday night at the Dunkin’ Donuts Center in Providence, Rhode Island. The Bears return to action Sunday afternoon when they visit the Thunderbirds in Springfield. Puck drop is set for 3:05 P.M.

STARTERS
Ilya Samsonov (4-8-0, 3.84 Goals-Against Average, .867 save percentage) started between the pipes for the visiting Bears. Zane McIntyre (6-6-3, 3.15 goals-against average, .879 save percentage) got the start in goal for the Bruins. The starting forward lines and defensive pairs for the Bears: 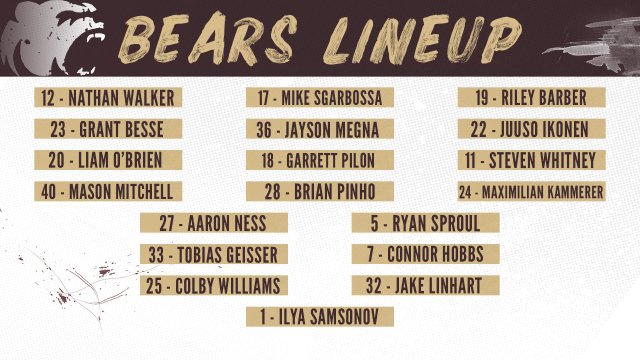 FIRST PERIOD
The Bruins would strike first on a goal from Jordan Szwarz, who put his eighth of the season past Samsonov on assists from Ryan Fitzgerald and Anders Bjork at the 7:09 mark of the opening frame to put the Bruins ahead by one. The Chocolate and White would find themselves shorthanded when defenseman Aaron Ness was sent to the box for cross-checking, a penalty that the Bears would subsequently kill off. The Bears would find themselves with the man-advantage just a few minutes later on a boarding call to Providence’s Tanner Pond, which the Bruins managed to kill off themselves.

🚨🚨🚨 Szwarz gets the goal with assists from Fitzgerald and Bjork🚨🚨🚨 pic.twitter.com/GLKEZd1zhf

Mike Sgarbossa would put the Bruins on the man-advantage yet again at the 19:57 mark of the opening frame. The Bears would end the first period down 1-0 and leading by one in the shot department, 9-8.

SECOND PERIOD
The Bears would open the second frame by killing off the penalty to Sgarbossa and following that up with a power play goal of their own from Ryan Sproul, who put his second of the season (and first as a Bear) on assists from Jayson Megna and Juuso Ikonen past McIntyre to even the score at 1-1. The Bears had another opportunity to add to their scoreboard total on yet another man-advantage, when Providence’s Austin Fyten was called for tripping at the 4:05 mark. The Bears, however, would fail to capitalize. Moments after their man-advantage ended, Sgarbossa potted his 12th goal of the season to give the Chocolate and White a 2-1 lead, on assists from Nathan Walker and Aaron Ness. The lead would less just a few minutes, as Szwarz tally his second of the game to even the score at two apiece.

Things would heat up moments later, as Tanner Pond delivered a heavy hit to Hershey blueliner Colby Williams, receiving a boarding penalty before having to answer to Connor Hobbs, who delivered some haymakers and an uppercut to Pond before both players were escorted off the ice. While Hobbs’ dominating fisticuffs performance was certainly energizing, it would be the Bruins who struck next, striking on a goal from Kyle Cumiskey at the 18:59 mark of the middle frame to put the Bruins ahead 3-2. The period would end with the Bruins ahead 3-2 on the scoreboard and up 18-15 in shots.

THIRD PERIOD
The Bears would find themselves by two early on in the third period, as Providence’s Cameron Hughes put his ninth of the season past Samsonov on a power play just 4:05 into the third to give the Bruins a commanding 4-2 lead. The Bears would have another opportunity to inch closer to Providence with another power play, but failed to convert. Anton Blidh would add an empty-net goal with just under two minutes left to play to push the lead to 5-2, followed by another empty-netter from Pond to give the Bruins a dominated 6-2 lead The Bears would end the game converting only once on five power play opportunites, while the Bruins would strike once on three chances. The Bruins finished with the lead in shots, 24-21.

Jon has been a Caps fan since day one, attending his first game at the Capital Centre in 1974. His passion for the Caps has grown over the decades, which has included time as a season ticket holder, social media and community organizer, and most recently led to the founding of NoVa Caps in 2014. Jon earned a Bachelor's of Science in Engineering at Old Dominion University, and is a Systems Engineer during intermissions, which has been instrumental in supporting his Capitals habit.
View all posts by Jon Sorensen →
This entry was posted in Game Re-Caps, Games, Hershey Bears, News, Teams and tagged AHL, Game Recap, Hershey Bears, Providence Bruins. Bookmark the permalink.