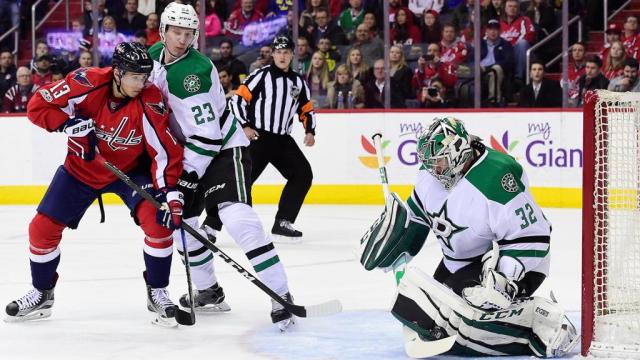 The Washington Capitals host the Dallas Stars on Tuesday night for the second and final meeting of the season between the two teams. Washington took a 4-3 overtime decision back on December 19 in a wild affair at American Airlines Center. Puck drop will be at 7 PM from Capital One Arena and you can watch it on NBC Sports Washington.

The Stars finish up a season-high six-game road trip. So far on the trip, they have dropped all five, going 0-3-2. They most recently dropped a 4-2 decision at the hands of the Winnipeg Jets. They suffered regulation loses in Pittsburgh and Montréal to start the road trip and overtime setbacks in Toronto and Ottawa before dropping Sunday’s game against Winnipeg.

The Stars have not been a good road team all season long, sitting with just a 14-17-5 record away from American Airlines Center. They have not won on the road since a 2-0 shutout win at Staples Center against the Los Angeles Kings on February 22 and have lost seven of their last eight road games dating back to February 18. The Stars may not have an impressive road record but they have won their past six visits to Washington and have not lost a road game to the Capitals since 2006.

Center Tyler Seguin leads the team with 38 goals, which is tied for fifth in the league with Minnesota Wild center Eric Staal and Colorado Avalanche center Nathan MacKinnon, and 69 points in 73 games this season and sits just four points shy of 500 career points. He had two goals and four points in his previous two games before being held off of the scoresheet in Winnipeg on Sunday. Dallas boasts other scoring weapons too. Jamie Benn has 26 goals and 66 points while Alexander Radulov has 25 goals and 63 points after signing a five-year contract worth $31.25 million ($6.25 million in the offseason). In addition to their forwards, Dallas boasts the highest-scoring defenseman in the league, John Klingberg. Klingberg has tallied 52 assists and 59 points, one point above his previous career high. He can become the first defenseman in the league to hit 60 points Tuesday night.

The Stars’ slumping road trip has put them out of a playoff spot with 10 games to go. They are tied with the Kings with 84 points for the second wild-card spot in the Western Conference but Los Angeles owns a game in hand on Dallas. The Kings also have a 37-34 regulation-overtime win advantage, so expect Dallas to come out with a lot of urgency to start Tuesday’s game. The Stars are also 2-4-4 in their last 10 games; only the Vancouver Canucks (1-7-2) own a worse record in the Western Conference during that span than Dallas. After Tuesday’s game in Washington, the Stars play four of the next five on home ice against Boston, Vancouver, Philadelphia, Minnesota. The visit the Wild in between the Philadelphia and Minnesota home games. The Stars end the season with a huge California road trip, which includes a game in Los Angeles, who they’re currently tied with for the final wild-card spot, and Anaheim, who are just two points ahead of them.

The Capitals are coming off of a 6-3 loss in Philadelphia on Sunday at the hands of the Flyers. The loss snapped their four-game winning streak. Goaltender Philipp Grubauer made 29 saves in the loss and Alex Ovechkin scored his 43rd goal of the season, which is tied with Jets’ forward Patrik Laine for the most in the league. Travis Boyd notched his first career NHL point with an assist on Ovechkin’s goal. Chandler Stephenson and John Carlson, who set a career-high with his 13th goal of the season, also struck for Washington.

The Capitals enter Tuesday’s contest with a five-game home ice winning streak and have not lost at home in a month. February 20th was the last time they lost at home when the Tampa Bay Lightning skated away from Capital One Arena with a 4-2 victory. The Capitals are also 7-2-1 at in 10 games at home since the All-Star break.

The Capitals are down to their final 10 games of the regular season and will look to protect first place in the division. They play their next six games against non-playoff teams and seven of their next eight. The Capitals will visit the Pittsburgh Penguins, who trail the Capitals by two points for first in the division, and host the Western Conference-leading Nashville Predators and the New Jersey Devils, who occupy the second wild card spot, in the only games they have left against current teams in playoff position. The Capitals and Penguins each have 10 games remaining to decide who gets the first division spot in the Stanley Cup Playoffs.

After missing the last game in Philadelphia, Capitals head coach Barry Trotz said on Monday that center Evgeny Kuznetsov, who left Friday’s 6-3 win over the New York Islanders with an upper-body injury in the final minute of the second period, and defenseman Brooks Orpik, who didn’t play because of a lower-body injury, are each doubtful to play against the Stars on Tuesday and said Orpik was closer to returning to action. Each are day-to-day. Kuznetsov is second on the Capitals with 71 points and leads the team with 50 assists.

–Tom Wilson‘s 31 points marks the first time he’s reached 30 points in his career. 29 of them have come at even strength while he got another one while shorthanded and the another on the man advantage. Wilson has drawn 34 penalties this season, which is tied for the third most in the league.

In the Capitals’ last home win against the Stars in 2006, Richard Zednick opened the scoring 13:05 into the first frame. Chris Clark struck 1:52 later on the power play to give Washington a 2-0 lead in the first. Jussi Jokinen cut the Capitals lead in half at the beginning of the second but Matt Petinger and Alexander Semin scored in the final 2:07 in the period to give the Capitals a 4-1 lead going into the third. Dallas got goals from Stu Burns and Jussi Jokinen for his second of the game in the third period but a three-goal lead would be too much to overcome for Dallas. The Capitals would prevail 4-3.

Harrison is a diehard Caps fan and a hockey fanatic with a passion for sports writing. He attended his first game at age 8 and has been a season ticket holder since the 2010-2011 season. His fondest Caps memory was watching the Capitals hoist the Stanley Cup in Las Vegas. In his spare time, he enjoys travel, photography, and hanging out with his two dogs. Follow Harrison on Twitter @HarrisonB927077
View all posts by Harrison Brown →
This entry was posted in Games, News, Washington Capitals and tagged Alex Ovechkin, Alexander Radulov, Braden Holtby, Chandler Stephenson, Dallas Stars, Game Preview, Harrison Brown, Jamie Benn, John Klingberg, Kari Lehtonen, T.J. Oshie, Tom Wilson, Travis Boyd, Tyler Seguin, Washington Capitals. Bookmark the permalink.