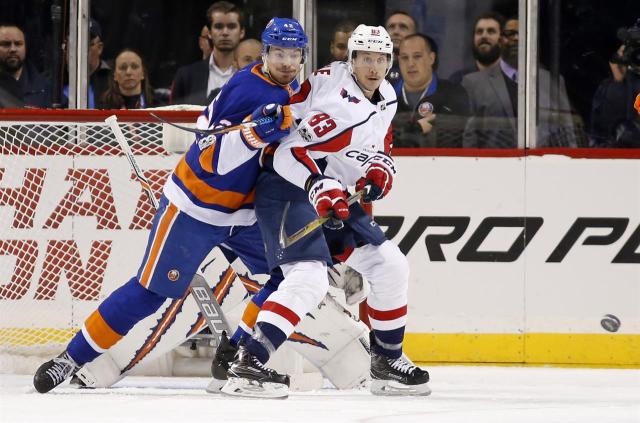 The Washington Capitals and New York Islanders begin a home-and-home series when they clash on Thursday night at Barclay’s Center in Brooklyn. The Islanders will follow the Capitals home immediately following the game for a rematch at Capital One Arena on Friday night. The teams split the first two meetings with each prevailing on their home turf. Washington earned a 4-3 win over New York on November 2 at Capital One Arena and the Islanders tied the season set with a 3-1 win on December 11 at Barclays Center. Puck drop is slated for a 7 PM start.

The Capitals have won two straight games against the San Jose Sharks by a 2-0 final on Saturday at SAP Center and returned home from the California road trip beating a very good Winnipeg Jets team by a 3-2 count in overtime. In their most recent game on Monday night against Winnipeg, Alex Ovechkin scored twice to eclipse the 600-goal plateau and notched his league-leading 42nd goal of the season. Evgeny Kuznetsov won the game on a breakaway in overtime beating Jets’ goaltender Connor Hellebyuck high glove side for his career-high 21st goal of the season.

The victory put Washington back in top spot in the division and sit a point in front of the Pittsburgh Penguins, who play the New York Rangers at Madison Square Garden tonight, and four in front of the Philadelphia Flyers, who host the Columbus Blue Jackets tomorrow night.

The Capitals have had a very stingy defense as of late. Since February 19, the Capitals have outshot opponents 351-308. The Capitals have outshot their opponents in four of their last five games and have recorded at least 30 shots in seven times in that 11 game stretch. Additionally, Washington has recorded 297 shots during five-on-five play and have allowed 270. That’s the eighth-most shots during that time frame and the 12th-fewest allowed. During that span, Washington has limited their opponents to 30 shots or fewer in eight of their last 11 games and in six-straight games.

The Capitals have earned a point in 13 of their past 16 games against the Islanders and have gone 9-4-3 in that span but have not won at Barclays Center since winning their first three games in the Islanders’ new arena.

New York has only won two of their previous 10 contests, going 2-4-4 in that span but snapped their eight-game losing streak with a 5-2 victory at Scotia Bank Saddle Dome against the Flames on Sunday, their last game. Prior to the win in Calgary, the Islanders lost three straight in overtime to the Penguins, Canucks, and Oilers on the road.

Thursday’s game marks the first home game for the Islanders since March 2, when they dropped a 6-3 decision to the Montreal Canadiens.

The Islanders started out as a really good home team but have dropped to 16-12-4 at Barclays Center after slumping for the past few months. Starting Thursday, the Islanders play six of their next seven at home and finish the season with eight of their remaining 12 games at home.

Despite the dreadful defensive numbers, the Islanders score the eighth-most goals in the league with 222 and score an average of 3.17 goals per game, which is tied with the Colorado Avalanche for the eighth highest in the NHL. Pending unrestricted free agent John Tavares and rookie sensation Matt Barzal share the team lead with 69 points. Forward Josh Bailey, who signed a six-year contract extension worth $30 million with the Islanders on February 23, has already set a career-high with 48 assists and 65 points in 65 games. His performance this season earned him to his first career All-Star Game appearance in January. Anders Lee leads New York with 33 goals this season and is one goal shy of his 34-goal output from last season.

Rookie goaltender Christopher Gibson will likely start for the Islanders. In his first three career games, he has a save percentage of .957 and a goals-against average of 1.90, despite facing 138 shots in those three games combined. He will make his first career start against Washington.

The Capitals and Islanders met in the postseason in 2015 for the seventh time in NHL history. After the Islanders took a 2-1 lead in the series, the Capitals took Game 4. After Alex Ovechkin scored the opening goal of the game with 6:53 left in the first period, Casey Cizikas tied it with 13 seconds left in the first frame. The game would remain scoreless until overtime, where Nicklas Backstrom walked up the half wall forcing John Tavares to lose his stick and snipe the game-winning goal past Jaroslav Halak. The Capitals tied the series at two and won the series in Game 7.

Harrison is a diehard Caps fan and a hockey fanatic with a passion for sports writing. He attended his first game at age 8 and has been a season ticket holder since the 2010-2011 season. His fondest Caps memory was watching the Capitals hoist the Stanley Cup in Las Vegas. In his spare time, he enjoys travel, photography, and hanging out with his two dogs. Follow Harrison on Twitter @HarrisonB927077
View all posts by Harrison Brown →
This entry was posted in Games, News, Teams, Washington Capitals and tagged Alex Ovechkin, Christopher Gibson, Evgeny Kuznetsov, Game Preview, Harrison Brown, John Tavares, Josh Bailey, Matt Barzal, New York Islanders, Nicklas Backstrom, Philipp Grubauer. Bookmark the permalink.