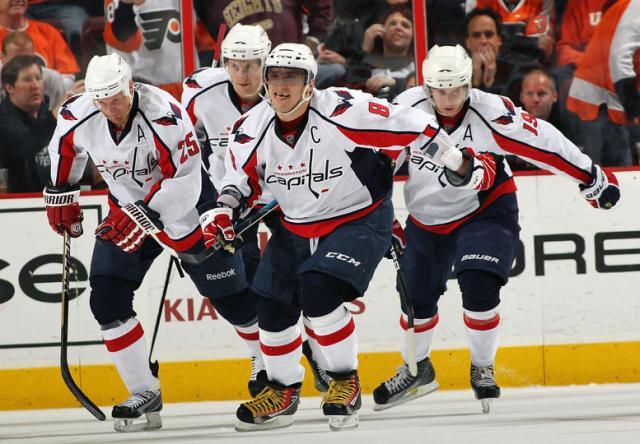 With the Philadelphia Flyers having just played at Capital One Arena on January 21, 2018 and about to return just 10 days later, it is time to think back to other matchups between these two teams.  The rivalry was especially heated during the 2010-11 season, a year in which the Capitals had the best record in the Eastern Conference while the Flyers had the second-best record in the Eastern Conference.  The Caps had a 48-23-11 record for 107 points and finished first in the Southeast Division.  Meanwhile, the Flyers had a 47-23-12 for 106 points and finished first in the Atlantic Division.  So, they were two evenly matched teams.  They played each other four times that season. In this piece, NoVa Caps’ Diane Doyle looks back at the season’s meetings between the two, longtime rivals.

This game took place at what was then the Verizon Center (now Capital One Arena.) The game was notable for being the very first game that Braden Holtby started during his NHL career. Opposing him in net was Sergei Bobrovsky, who at the time was a rookie who had won the job as the Flyers’ number one goaltender.

This game proceeded in see-saw fashion.  During the first period, the Flyers Nikolai Zherdev scored nearly halfway through the period, but the Caps answered back on a goal by winger Eric Fehr with about two and a half minutes left in the period.  The second period was similar. Philadelphia’s Ville Leino scored the goal ahead goal for the Flyers about four minutes into the second period. But nearly five minutes later, Capitals right wing Alexander Semin scored a power play goal to tie up the game at 2-2.

Sean O’Donnell received a boarding penalty for the Flyers with less than 20 seconds to go in regulation, which put the Caps on a power play, which continued into the overtime period.  This penalty took place while Flyers defenseman Chris Pronger was still in the penalty box for a double minor penalty earned for high-sticking.  Capitals defenseman Mike Green scored about half a minute into overtime, illustrating once again that he was Game Over Green and giving the Capitals the 3-2 win

Just thirteen days later, the Flyers returned to the Verizon Center for a return engagement with the Capitals.  This time, the goalie matchup included Brian Boucher, the Flyers’ backup goalie, against the Capitals’ Michal Neuvirth, who generally shared goaltending duties with Semyon Varlamov.  In this game, rookie Marcus Johansson scored the first goal just over eight minutes into the first period, staking the Caps to a 1-0 lead, which held up through the end of one period.

The Caps could not hold onto that lead, however, giving up two goals during the second period; a power play goal to Claude Giroux and then a goal to Mike Richards with just over two minutes to go in the period. The score at the end of two periods was 2-1.

Just before the midpoint of the third period, Jeff Carter scored for the Flyers, giving the Flyers a 3-1 lead.  The Flyers took a minor penalty just after the 10:00 minute mark with the Capitals’  Nicklas Backstrom scoring exactly a minute later. While Backstrom scored, another Flyer took a penalty.  Jason Chimera scored the tying goal just 30 seconds later to tie up the game at 3-3.  Just over two minutes later, Andreas Nodl put the Flyers ahead again, 4-3.  Danny Briere took a penalty with less than two minutes to go in the game and, this time, Fehr scored on the power play to tie the game at 4-4.

The game went into overtime, but even that was not enough, as the game proceeded to a shootout.  The Flyers won on a goal by Briere, while none of the Capitals’ three shooters – Alex Ovechkin, Backstrom, and Semin – were able to convert.  The final score was 5-4 in favor of the Flyers.  The game featured 16 minor penalties, with nine for the Caps and seven for the Flyers.  The Flyers scored one power play goal while the Caps scored three.

This game took place on the road at Wells Fargo Center.   This game featured the Flyers scoring in each of the first two periods, with Jeff Carter scoring about 1½ minutes into the first period and Claude Giroux scoring with 6 ½ minutes left to go during the second period.  The score was 2-0 in favor of the Flyers.

The third period was much better for the Caps, with Mike Knuble and Ovechkin each scoring a goal. The score was now tied at 2-2.

Just over a minute into the overtime period, Andrej Meszaros scored the game-winning goal to lift the Flyers over the Capitals 3-2.

On the goaltending front, Neuvirth was in goal for the first period for the Capitals, being relieved by Semyon Varlomov for the last two periods.  For the Flyers, it was Bobrovsky again.

On the goaltending front, Neuvirth was in goal for the Caps during the first period.  He likely injured his groin while making a challenging save that period.  He was relieved by Semyon Varlomov for the last two periods.  After the game, it was announced that Neuvirth was day-to-day with a lower body injury.  For the Flyers, Bobrovsky was in goal, again.

This game also took place on the road at Wells Fargo Center.  The goalie matchup was Neuvirth vs Bobrovsky.  The game began will for the Caps, with Nicklas Backstrom scoring his 18th goal and Mike Knuble scoring his 20th goal.  The Caps led 2-0 after one period.

The Caps added a power play goal by defenseman Dennis Wideman early during the second period to stake the Caps to a 3-0 lead.  At that point, the Flyers pulled Bobrovsky and replaced him with Boucher.  But the Flyers added two goals during second period, to make things more interesting for the Caps.  The score at the end of two periods was 3-2 in favor of the Caps.

Once again, the game proceeded to overtime where neither team could dent the twine.  Hence, it proceeded to a shootout. This time, two Flyers shooters were successful. But, fortunately for the Caps, all three of their shooters – Matt Hendricks, Backstrom, and Semin – were successful and the Caps won the game 5-4.

The Capitals-Flyers games during the 2010-2011 season was a four-game season series where no game ended in regulation. There were two games decided in a shootout, with both decided by a 3-2 score.  The other two games were decided in overtime, with scores of 5-4.  Both teams scored a total of sixteen goals in that series, with each team getting awarded one point in the shootout.

A fan could not help but wonder if those teams would match up against in Eastern Conference Finals, especially when they were so evenly-matched. But that was not to be.  While both teams advanced past Round 1, they both were eliminated in Round 2 in four-game sweeps, with the Tampa Bay Lightning sweeping the Caps and the Boston Bruins sweeping the Flyers.