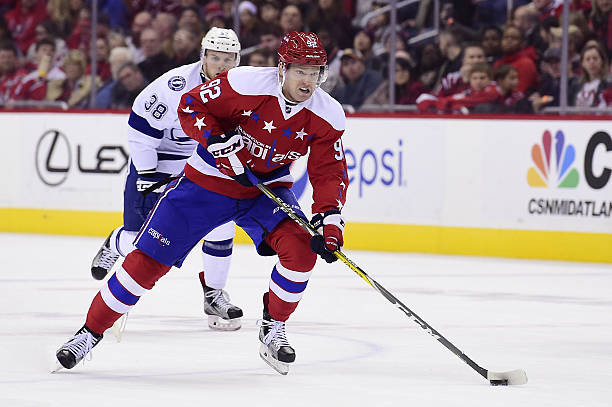 The Washington Capitals will play their annual Black Friday late matinee against the Tampa Bay Lightning. These two teams played earlier this year when the Lightning came back from a 3-1 hole to win the game 4-3 in overtime. These two teams will meet for the final time when Tampa visits Washington again on February 20.

The Tampa Bay Lightning will begin a four-game road trip against the Capitals and will open a set of back-to-back games. They play at PPG Paints Arena against the Pittsburgh Penguins on Saturday.

Tampa Bay has won five of their past six games and lead the league through Thanksgiving. They have a 7-1-1 road record this season and are 7-2-1 in their past 10 games. The Lightning are also leading the league in goals for with 83 through 21 games, averaging 3.90 goals per game. They have given up the fourth fewest goals in the league (53) and have an average of 2.53 goals against per game. The Lightning have the best power play in the league, scoring on 27.2% on their opportunities.

Lightning captain Steven Stamkos leads the league with 36 points through 21 games. He has 10 goals, including 7 on the power play. Right behind him is fellow linemate Nikita Kucherov with 33 points. Kucherov also leads the league with 17 goals. He had a 7-game goal streak to start the season with eight goals in that span.

Goaltender Andrei Vasielevskiy leads the league with 15 wins. He also has a .929 save percentage, which is the 12th best in the league and is 13th in the league with a 2.32 goals against average. He will likely get the start on Friday afternoon. Lifetime against Washington, he is 1-3-0 with an .876 save percentage and a 3.96 goals against average. He stopped 26 out of 29 shots that he faced in the 4-3 Tampa victory.

The Capitals are looking to close out their homestand strong after beating the Ottawa Senators 5-2 on Wednesday night at Capital One Arena. The Capitals are seeking their 3rd win in 4 games after having a winless two-game road trip in Nashville and Colorado last week. They will start another set of back-to-backs against the Lightning as they get on a plane to Toronto after Friday’s game against the Lightning to face the Maple Leafs at the Air Canada Centre in Toronto on Saturday night.

The Capitals made line changes ahead of Wednesday’s 5-2 victory against Ottawa in an effort to spark the offense, including putting Alex Ovechkin and Nicklas Backstrom together for the first time this season. Backstrom had the secondary assist on Ovechkin’s tally with 5 seconds remaining in the first period which gave the Capitals a two-goal lead.

Perhaps the best line in Wednesday’s win was the line featuring Jakub Vrana, Evgeny Kuznetsov, and T.J. Oshie. The three combined for three of Washington goals. Vrana scored twice, Kuznetsov had a 3-point night, which included a goal, and Oshie assisted on two goals.

With a win, Washington can move into third in the division if the Penguins lose to the Boston Bruins on Friday afternoon and if the Philadelphia Flyers defeat the New York Islanders.

The Capitals have a point in each of their past nine games against the Lightning, going 7-0-2 in that span. They have not lost to the Lightning in regulation since November 1, 2014.

Braden Holtby will likely get the start after stopping 29 of 31 shots faced against the Senators on Wednesday. Lifetime against Tampa, he is 9-2-2 with a .915 save percentage and a 2.65 goals against average in 15 career outings against the Bolts.

-Alex Ovechkin has earned 41 goals and 83 points in 64 career games against Tampa Bay, the second most points he has earned against a single NHL franchise (88 against Atlanta Thrashers/Winnipeg Jets)

-Evgeny Kuznetsov leads the Capitals with 26 points this season. He has 3 goals and 6 points in his past four games, including a goal and two assists against Ottawa on Wednesday

–Nicklas Backstrom has 44 assists lifetime against the Lightning, the most he’s had against a single NHL franchise

After the Lightning scored three times in the first 12 minutes of the game against the Capitals on December 10, 2013, the Capitals took over. Alex Ovechkin scored off the faceoff dot to cut the Lightning lead to two. Nicklas Backstrom scored before Tyler Johnson made it 4-2 and Alex Ovechkin scored twice in a span of 2:10 on a five-minute power play to tie the game at 4 going into the third period. Ondrej Palat would make it 5-4 Tampa 8:36 into the third period before Alex Ovechkin tied it in the final minute for his 4th goal of the game. The game went into a shootout where Troy Brouwer scored the game-winning goal for Washington in the fifth round. Centers Eric Fehr and Mikhail Grabovski also struck for Washington in the shootout in a wild 6-5 Capitals victory.

Harrison is a diehard Caps fan and a hockey fanatic with a passion for sports writing. He attended his first game at age 8 and has been a season ticket holder since the 2010-2011 season. His fondest Caps memory was watching the Capitals hoist the Stanley Cup in Las Vegas. In his spare time, he enjoys travel, photography, and hanging out with his two dogs. Follow Harrison on Twitter @HarrisonB927077
View all posts by Harrison Brown →
This entry was posted in Games, News, Washington Capitals and tagged Alex Ovechkin, Andrei Vasilevskiy, Braden Holtby, Evgeny Kuznetsov, Game Preview, Harrison Brown, Jakub Vrana, Nicklas Backstrom, Nikita Kucherov, Ondrej Palat, Steven Stamkos, T.J. Oshie, Tampa Bay Lightning, Tyler Johnson, Washington Capitals. Bookmark the permalink.

1 Response to Capitals Close Out Homestand against League-Leading Lightning