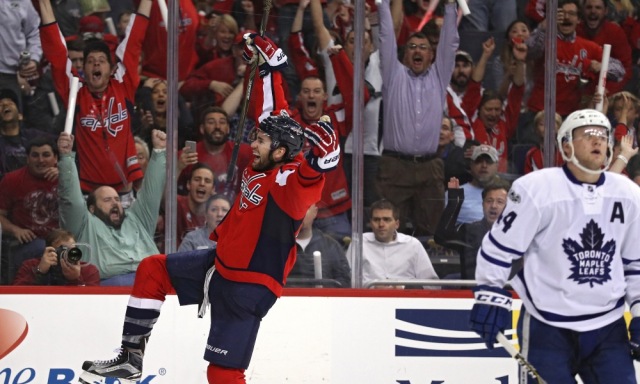 Following a set of back-to-back set of road games over the weekend, the Capitals return home on Tuesday night to host the Toronto Maple Leafs. This is the first time the Capitals will play the Maple Leafs since they dismissed them in a six-game series last Spring. This should be an entertaining game as two of the NHL’s most offensive powerhouses clash at Capital One Arena tomorrow night.

The Capitals will be looking to bounce back from an ugly 8-2 loss to the Philadelphia Flyers on Saturday night while the Maple Leafs bounced the Montreal Canadiens 4-3 in overtime on that same evening.

The Maple Leafs hold the lead in the Atlantic Division race with a 4-1-0 record through five games. They currently lead the NHL, averaging 5.20 goals per game piling up 26 goals. Calder Trophy winner Auston Matthews leads Toronto and is tied for 6th in the NHL with 5 goals and 8 points. They currently that have eight players with 5+ points; Matthews, William Nylander, Patrick Marleau, Nikita Zaitsev, Nazem Kadri, and James Van Riemsdyk.

On Monday, they bumped down Mitch Marner to the fourth line. Marner has a -6 rating through the first five games. They also promoted forward Connor Brown, who was a 20+ goal scorer last season, to the top nine forward group.

The Leafs’ offensive numbers may be eye-catching but they have also given up 19 goals, averaging 3.80 goals against per game. The Maple Leafs do not have as much fire-power on the backend as they do up front.

Goaltender Fredrik Andersen has played all of the Maple Leafs’ games and has a .880 save percentage and a 3.76 goals against. While some of that is to blame on a weak defense in front of him, the offense may be scary but they are not going to keep averaging 5.20 goals per game the whole year. He has to be better between the pipes if Toronto hopes to remain on top of the Atlantic Division.

Over the offseason, the Leafs made their offense even more dangerous by bringing in Patrick Marleau. The 38-year old forward scored 27 goals and 46 points, while playing in all 82 games for the San Jose Sharks. So far, he has three goals and five points through five games. They also brought in defenseman Ron Hainsey to help stabilize the defense but that still remains an area of concern. He has 3 points, all assists, and a +1 rating so far with Toronto.

The Capitals have been fairly similar to the Leafs’ so far this season in terms of team structure. Their offense has been lethal, averaging 3.67 goals per game with 22 goals through their first six contests.

A majority of their offensive production comes from their top group of players. Nicklas Backstrom, who just got named the NHL’s third star of the week today, leads the team and the league with 3 goals and 11 points. Evgeny Kuznetsov is tied for the team and league lead with 11 points, all assists. He has thrived since starting the year with Alex Ovechkin and Jakub Vrana, contributing to one of the NHL’s hottest lines. Ovechkin leads the league with nine goals. He has been fantastic for the Capitals, shooting at a rate of 25.7%. Six of his goals have come at even strength.

While the offense has been really good, the Capitals, like the Maple Leafs, have had defensive issues. The Capitals have given up 22 goals through their first five games and have given up an average of 34.5 shots per game. They also lost defenseman Matt Niskanen for a few weeks on Saturday after being placed on injured reserve with an upper-body injury. The Capitals will have a very youthful and inexperienced blue line yet again on Tuesday night.

On Monday, head coach Barry Trotz kept his forward lines intact but shuffled up his defense pairings. He put Tyler Graovac in the third line center position while Lars Eller missed practice due to illness on Monday.

Despite the weak defense in front of him, Braden Holtby has played well earning a 2.47 goals against average and a .923 save percentage while going 3-1-0. He will likely get the start again on Tuesday against the Maple Leafs.

Last time these two teams met was Game 6 of the First Round of the Stanley Cup Playoffs in April. After going scoreless the first two periods, Auston Matthews gave Toronto the 1-0 lead and put Toronto 12:15 away from forcing a Game 7 at 7th and F street. Marcus Johansson scored a little more than five minutes later to tie the game. The game went into overtime for the fifth time in six games. Johansson struck again 6:31 into overtime off of Justin William’s rebound to end the Maple Leafs’ season.