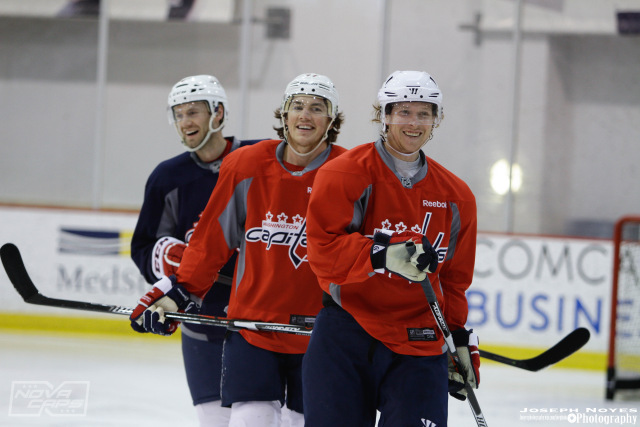 Today, the Washington Capitals announced their promotional calendar for the upcoming season. The Capitals have three new fan giveaways as well as several cultural theme nights that they have used in seasons past.

Opening Night on Saturday, October 7 against the Montreal Canadiens will kick off the promotion schedule with a red carpet event and a magnet with the 2017-18 season schedule on it. The Capitals will also hold a T.J. Oshie Stadium Series bobblehead night on March 20 when they host the Dallas Stars, and the team will conclude their promotional calendar with the 2017-18 team poster giveaway in its last game of the season on Saturday, April 7, against the New Jersey Devils.

The Capitals will have their annual Hockey Fights Cancer Night on Thursday, November 2, against the New York Islanders where fans can make signs honoring friends and family members they are supporting in their fights against cancer. Finally, Hockey Is For Everyone Night will be held on Saturday, February 24 against the Buffalo Sabres.

The Capitals will also have drives to help people in need, including a pre-Thanksgiving food drive where fans bring in canned food on Saturday, November 18, against the Minnesota Wild as well as a pre-holiday toy drive on Friday, December 9, against the New York Rangers.

The Capitals will continue to holiday celebrations with #CapsGiving night on Wednesday, November 22, against the Ottawa Senators and the annual #CapsHolidayParty on Saturday, December 16, against the Anaheim Ducks. Their final holiday celebration will occur on Friday, March 16, when they take on the Islanders. The Capitals will celebrate St. Patrick’s Day with Go Green Night during the NHL’s Green Week.

The full Capitals Promotional Schedule can be found below: