Posted on September 13, 2017 by Michael Fleetwood 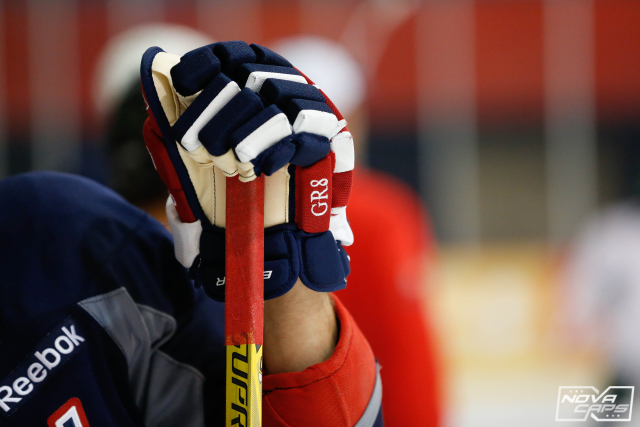 If there’s one thing that indicates hockey season has arrived, it’s every NHL team’s training camp and the excitement and uncertainty of the Opening Night roster of each. This afternoon, the Capitals released their initial training camp roster and schedule to kick off the 2017-18 season.

Aside from the returning members of last season’s Capitals team, new faces to training camp include offseason signings such as right wing Devante Smith-Pelly and Anthony Peluso, as well as Professional Tryout Offer signings in Jyrki Jokipakka and Alex Chiasson, both of whom signed within the last two weeks. Also attending are prospects such as defensemen Christian Djoos, Lucas Johansen, Madison Bowey, and Connor Hobbs, and forwards Jakub Vrana, Nathan Walker, Riley Barber, and Travis Boyd, most of whom are looking to earn spots in the Capitals’ Opening Night lineup. The roster is as follows: 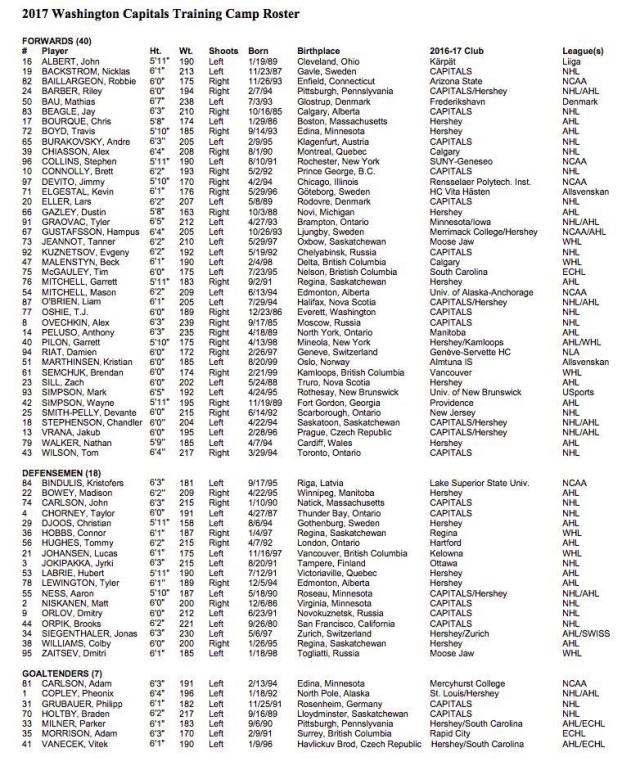 The schedule is listed here:

Our guide to Kettler Capitals Iceplex is here.

Deemed the most NHL-ready of the Capitals’ prospects by many within the organization, Walker will be battling for a spot in the Caps’ lineup this fall. After being drafted by the Capitals 89th overall in 2014, Walker could make history as the first Australian-born player to play in the NHL. After signing a two-year deal early in the offseason, Walker will likely look to earn a spot in the Capitals’ bottom-six. With two defensive spots available, the battles on the blueline will arguably, be the most-watched during this year’s training camp. While Djoos seems to be a likely choice, Bowey, Hobbs, and even Johansen could be candidates to win the jobs. After the cancellation of the league’s annual rookie tournament due to Hurricane Irma, the Capitals’ prospects will be expected to bring 100%, especially with several openings on the NHL roster available. Vrana, the team’s top prospect, will be have to earn a spot on the Opening Night roster, despite his skill-set and promising potential.

All on-ice sessions, like every #Caps practice at @KettlerIceplex, will be open to the public and free of charge. https://t.co/LiZh2AUyYy

With the losses of top-six forwards Justin Williams and Marcus Johansson, youngsters Evgeny Kuznetsov and Andre Burakvosky are expected to step up in a big way this season, as is established blueliners Dmitry Orlov, John Carlson, and Matt Niskanen, and young right wing Tom Wilson. The Capitals will also be expecting a bounce-back year from captain Alex Ovechkin, after an unusual 33-goal performance last season. Goaltender Braden Holtby will be expected to continue his consistently strong performances in net in 2017-18. Fresh off a new eight-year contract, right wing T.J. Oshie will be looked upon to continue to be productively offensively playing alongside star center Nicklas Backstrom. Right wing Brett Connolly is looking to repeat his strong showing from last year.

While it doesn’t receive as much fanfare as the trade deadline, free agency, or the Stanley Cup Playoffs, training camp is a vital time in the NHL season. And after such a busy offseason, the Capitals’ camp will be one to watch. The team’s training camp schedule can be found below.

Michael Fleetwood was born into a family of diehard Capitals fans and has been watching games as long as he can remember. He was born the year the Capitals went to their first Stanley Cup Final, and is a diehard Caps fan, the owner of the very FIRST Joe Beninati jersey and since then, has met Joe himself. His favorite player became former Capital Nate Schmidt after he met Schmidt in a Hershey hotel while in Hershey PA to see the Bears play, shortly after Schmidt was injured during a conditioning stint. Michael is also a fan of the Pittsburgh Steelers and Baltimore Orioles, and enjoys photography, watching WildEarth TV's SafariLive live safaris, and watching animals in his spare time. (Photo by Adam Vingan in 2014 at the Capitals Development Camp).
View all posts by Michael Fleetwood →
This entry was posted in News, NHL, Players, Propsects, Washington Capitals and tagged 2017-Washington Capitals Training Camp, Michael Fleetwood, Training Camp. Bookmark the permalink.