The Capitals Want to Re-sign T.J. Oshie, but How Much Will He Cost? 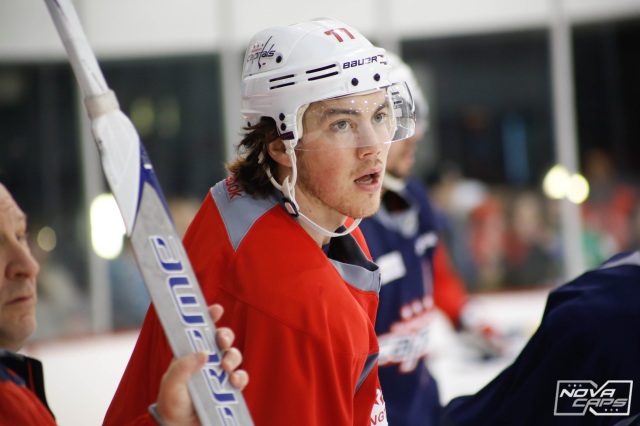 The Capitals have made it clear that they hope to re-sign right wing T.J. Oshie to a new contract before he hits unrestricted free agency on July 1. While there are likely no Caps fans that would disagree with that, the reality is that this summer makes that easier said then done. With difficult decisions looming, and Oshie having arguably, the best season of his career, the ultimate factor will be what it will cost to lock him up.

In the final year of a five-year, $20.875 million contract he signed when he was still a member of the St. Louis Blues, Oshie is having himself a career year offensively. With 30 goals, he has already surpassed his former career-high of 26 goals, and is currently leading the Capitals in goals. He has also recorded 21 assists for a total of 51 points, despite missing 12 games due to injury.

Oshie’s current contract carries an average annual salary of $4.175 million, and given his current production, is in line for a massive pay raise. At 30-years old, the former first-round pick is still in the prime of his career and will likely be looking for both term and dollar on his next contract. First-line forwards are always in demand around the NHL, and there will be no shortage of teams vying for Oshie’s services.

But it’s not just the amount of points Oshie has compiled in his two seasons (so far) in D.C., but the rate at which he’s done so. Through 140 games played in a Caps sweater, he has scored 56 goals and added 46 assists for 102 points, an average of 0.73 points per game; this is more than his 0.70 points per game in seven seasons with St. Louis, and his career average of 0.71.

So exactly what will it cost to re-sign No. 77? Taking into account age, current salary, and rate of production, Oshie could command a salary north of $6 million. With two young daughters, stability will likely play a factor in his decision, and having become an integral part of the Capitals both on and off the ice, Oshie could possibly give the Caps a hometown discount, albeit not a huge one.

While staying in Washington would likely be the first choice for both parties, the salary cap, upcoming Expansion Draft, and other free agent decisions will ultimately have the final say in whether No. 77 stays or goes. Either way, it’s a difficult decision.

Michael Fleetwood was born into a family of diehard Capitals fans and has been watching games as long as he can remember. He was born the year the Capitals went to their first Stanley Cup Final, and is a diehard Caps fan, the owner of the very FIRST Joe Beninati jersey and since then, has met Joe himself. His favorite player became former Capital Nate Schmidt after he met Schmidt in a Hershey hotel while in Hershey PA to see the Bears play, shortly after Schmidt was injured during a conditioning stint. Michael is also a fan of the Pittsburgh Steelers and Baltimore Orioles, and enjoys photography, watching WildEarth TV's SafariLive live safaris, and watching animals in his spare time. (Photo by Adam Vingan in 2014 at the Capitals Development Camp).
View all posts by Michael Fleetwood →
This entry was posted in Free Agency, News, NHL, Players and tagged Michael Fleetwood, T.J. Oshie. Bookmark the permalink.

7 Responses to The Capitals Want to Re-sign T.J. Oshie, but How Much Will He Cost?