How Much is MoJo Worth to the Capitals?

As was announced on Tuesday, Marcus Johansson filed for arbitration for the 2nd consecutive year. With this past season’s $3.75 million contract, Johansson is looking to up his value.

Most estimates put him at about $4 million for the next year, and rightly so. MoJo had his 2nd most successful season as a Capital, posting 17 goals and 29 assists in 74 games. Johansson was also an integral part of the Caps power play, feeding pucks to T.J. Oshie from below the goal line. In terms of his HERO chart, MoJo is slated as a 2nd line scoring winger, but the majority of his numbers fall into the 3rd line range completely, or slightly overlap into 2nd line range. This is most likely because that’s where he played a decent amount of minutes, save for the Tre Kroner line with Nicklas Backstrom and Andre Burakovsky.

Now, should the Caps decide to not re-sign Johansson, they’ll need a player who can match or exceed these numbers for equal or lesser value, who hopefully is a free agent, and plays left wing but could maybe fill in at center if need be. In terms of contract, these are some of the players MoJo is in range with: 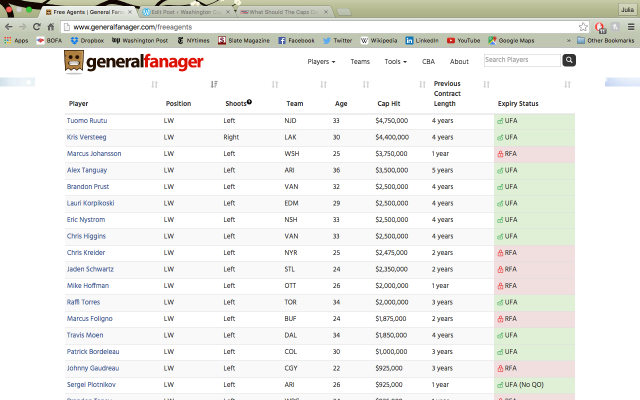 The name that has been tossed around most as a possible replacement is Kris Versteeg, whose numbers look scary now, but is projected to be a cap hit of $2.6 million. Luke Adomanis rightly argues the Caps should pursue Versteeg if a Johansson deal falls through. But Versteeg has also filed for arbitration, and would undoubtedly get top line or second line minutes with the Kings should they come to an agreement, and possibly more money. If a player has played on lines with Patrick Kane and Jonathan Toews, why get paid that much money to only play 3rd line minutes with 2 guys who, as Luke Adomanis adds, are unproven?

The other name on that list that could be interesting is Chris Kreider. Kreider’s numbers look pretty decent, but blueshirts aren’t exactly hot for him, analogizing him to Tantalus. If he does figure out how to hit the net, and he figures it out with the Capitals, the Rags will probably be kicking themselves. And let’s be honest, making Rangers fans cry would be fun.

If I’m the Capitals, Johansson adds playmaking ability to a 3rd line that would desperately need it. Additionally, when the Vegas draft rolls around, he very well could be one of the players the Capitals protect. Plus, in terms of actual cap hit from this past season, MoJo is probably right where he should be in terms of contributions. The only real outlier here is Andre Burakovsky, who is due for a raise soon. 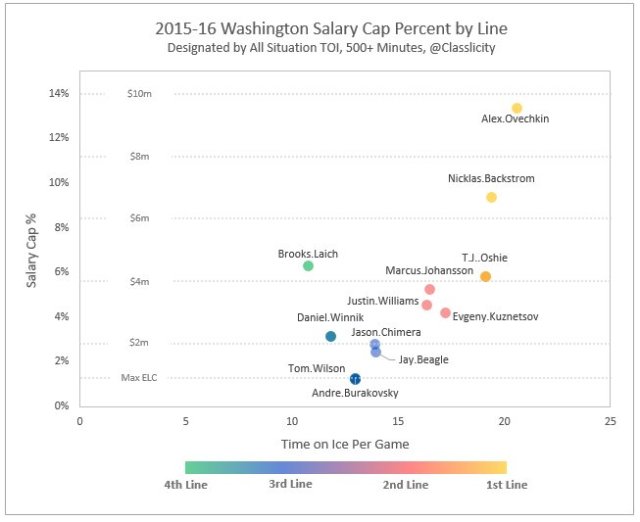 If the Capitals need to shed salary desperately to keep MoJo around, which is entirely plausible, trading Brooks Orpik should be a top priority. While captain Alex Ovechkin has stated that he is one of the Caps best defenseman, that statement falls on dubious numbers. His cap hit is up there with Brent Seabrook and Brent Burns. His $5.5 million cap hit could go towards paying, I dunno, Tyson Barrie? Food for thought given the current arbitration situation.

Julia has been a Caps fan ever since her dad took her to a game for her 8th birthday. She played throughout high school and college and still plays to this day. She is currently a part-time sports aide at the Washington Post where she covers high school field hockey, golf, and tennis.
View all posts by Julia Karron →
This entry was posted in News, Opinion and tagged Andre Burakovsky, Chris Kreider, Julia Karron, Kris Versteeg, Luke Adomanis, Marcus Johansson, Nicklas Backstrom, T.J. Oshie. Bookmark the permalink.

3 Responses to How Much is MoJo Worth to the Capitals?