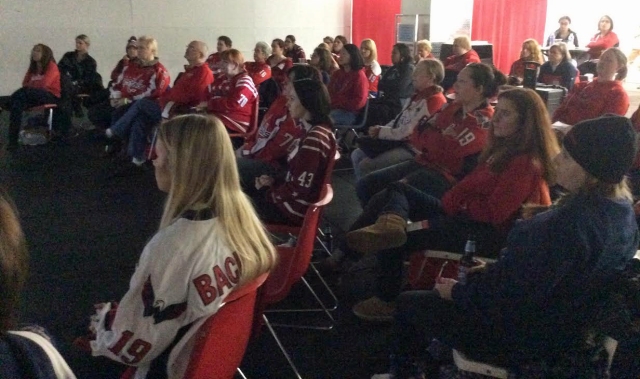 Spoiled Rotten is how I feel after Club Scarlet’s viewing party tonight at Kettler Ice Complex. Club Scarlet is the Capitals’ official club for female hockey fans and membership is free. 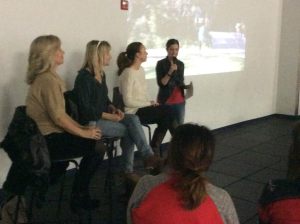 Erin MacGee, the Capitals effervescent In-Arena Host at the Verizon Center was our master of ceremonies, helping the 50+ club members to “Rock the Red” all night long.

While the members were busy heating up the ice, Ecos Catering was busy fixing up tasty game time treats. Ecos head chef Robert Wood, is responsible for feeding the Caps two meals a day while they are in town. He took special care tonight to fix some of the Capitals’ players’ favorite noshes for the Club Scarlet crew. Following a warm welcome by our Club Scarlet hostess Erin MacGee we were treated to Ecos’ delicious spread that included julienned style carrot, squash and zucchini with red pepper humus and basil pesto dips, beet salad a top crisp cucumber slices, empanadas and my favorite, salmon with capers. Of course, we were able to wash down these healthy selections with beer, wine, or soft drinks all provided courtesy of Club Scarlet.

However, the VIP treatment went well beyond the food and drink. The Capitals swag abounded and Club Scarlet allowed members to choose any item from the prize table every time the Capitals scored a goal. The table was overflowing with Nicklas Backstrom gnomes, Barry Trotz bobble heads, umbrellas, glass mugs, canvas tote bags, Braden Holtby lunch boxes and more. After both goals, members quickly stampeded for the choicest selections of Capitals memorabilia and it was the bobble heads that seemed to go fastest. 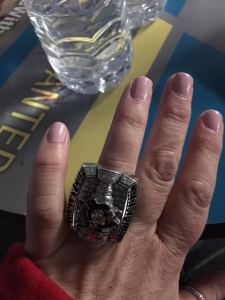 Special treats also awaited members during the intermissions. During the first intermission, Erin MacGee introduced us to Kim Trotz, Ivy Forsythe and Shelby Reirden, who gave us insight into what it’s like being a professional hockey coach’s wife. Reirden even brought husband Todd’s 2009 Stanley Cup ring to the event, letting all participants freely gawk and even try it on. Kim and Barry Trotz were hometown sweethearts with a history that spans back to elementary school. Shelby Reirden met Todd in Texas while he was playing with the now defunct International Hockey League. Reirden, having dutifully served as both a player and now coach’s wife spoke of the difficulties that trades and unexpected moves bring. The TV crawl alerted Shelby and Todd to one while they were honeymooning in Hawaii. It’s challenging to be a coach’s wife, it’s their livelihood they all agreed and Shelby shared one key piece of advice, “if they’re losing then you’d better be asleep when they [the player or coach] walks in the door [to the home].”

Perhaps the highlight of the evening was the raffle during the second intermission, where member Lisa Colmus won a hockey stick signed by Justin Williams and Hunter Robbins won a third jersey autographed by Braden Holtby. Hunter, “who never wins anything” had only hung on to her raffle ticket at her friend’s urging. A puck autographed by Brooks Laich was also included in the raffle. To complete our royal treatment, we also received 20 percent off the purchase price of all items in Kettler’s team store.

Jon has been a Caps fan since day one, attending his first game at the Capital Centre in 1974. His passion for the Caps has grown over the decades, which has included time as a season ticket holder, social media and community organizer, and most recently led to the founding of NoVa Caps in 2014. Jon earned a Bachelor's of Science in Engineering at Old Dominion University, and is a Systems Engineer during intermissions, which has been instrumental in supporting his Capitals habit.
View all posts by Jon Sorensen →
This entry was posted in Fans, News and tagged Scarlet Caps, Stephanie Judge. Bookmark the permalink.